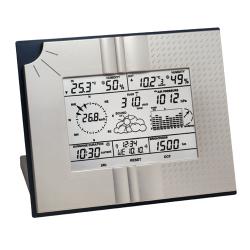 Since  2003 I record weather data in Koblenz Lay (Germany). Initially I used a small weather station called ws2500. This station was manufactured by a company named ELV. In between the station is no longer available. Another problem is that not only the station itself is no longer available but there are also hardly any spare parts like replacement sensors out there any longer. On the photo to the left you can see the display variant of this station, for recording weather data there is another variant without display called ws2500 PC with a small builtin memory to store some weather data. The device is attached via a serial interface to your PC. The station did a good job for many years. 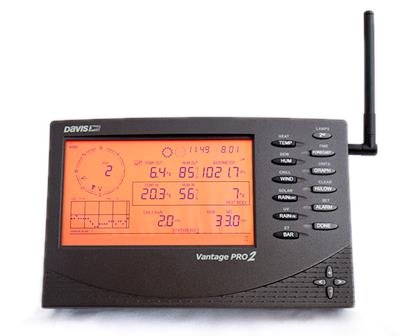 However in Dec 2011 the station had more and more trouble with its sensors. Since no replacement parts were aavailable it was time to get a new station. After a intensive search, I found a new one, the Davis Vantage Pro 2. The photo on the right shows the Console of this station. It is very versatile, reliable but on the down side also very expensive. Aside from the console I also needed a Davis Weather Envoy device, which is after all a receiver for the sensor signals that are transmitted wirelesly. To store data for a short while in  weather envoy and to extract data from it, I purchased a Datalogger DL2.0 from Fjord Technology. This device is mounted inside the envoy and conects via USB to my Linux PC.

To extract the weather data from the ws2500 station I wrote a small program (C) an aditionally some scripts that alltogether turn a linux system into a weather observation machine. The data extraced from the station are written to a MYSQL database and using teh  CGI script wetter.cgi on a apache web server can be displayed graphically. The software can freely be downloaded. It will be running on linux and some mac users reported success as well.

When changing the weather station to the Davis Vantage Pro 2 the question was of course how I could preserve all the weather data of the last 8 years delivered by the old ws2500 station? These data should still be usable and there should be no break between the old and the new data.

The solution was quite easy. I found wview, a software that is capabale of extracting data from several different weather station among them the Davis Vantage Pro2. wview stores these data in a local sqlite3 database. By writing some scripts I can extract new data from wviews sqlite3 database and insert all new data into my wetter-MYSQL database. Since the MYSQL database did not change using wetter.cgi I can immedeately visualize the old as well as all new data seamlessly. You can look at the result on my weather page created by wetter.cgi. ws2500 data were inserted up to and including  Dec 13 2011, new data delivered by the VP2 were inserted stating with Dec 14. If you look at the data of this time you won't see any break.

So if you have a old ws2500 that starts breaking down, you might consider to purchase a wview compatible station and use my software to transfer wviews data into the wetter MYSQL database so you can look at the data using wetter.cgi.

Even if you did not use wetter.cgi up to now, you might give it a try which is quite easy if you run your station using wview and use my scripts to trabsfer the data into my MYSQl wetter-database.