Today, GPSR (General Purpose Service Robot) was at the top on the agenda. This test evaluates Human-Robot Interaction and the integration of general abilities expected of a robot in stage 1, such as navigation, finding objects and grasping. In this test, the robot has to solve multiple tasks, which are randomly generated and consist of 3 subtasks, upon request.

The command is composed of three tasks, which the robot has to show it has recognized. The robot may repeat the understood command and ask for confirmation. If it can’t recognize the command correctly, it can also ask the speaker to repeat the complete command, or ask for further information.

Lisa did actually quite it well, she could recognize the commands and was always able to perform the first. She had some problems with gripping an object from the table and with person detection, however, she always ccontinued and finished the game even when failing a previous task.

Overall, we got the highest score of all teams in this game (77). 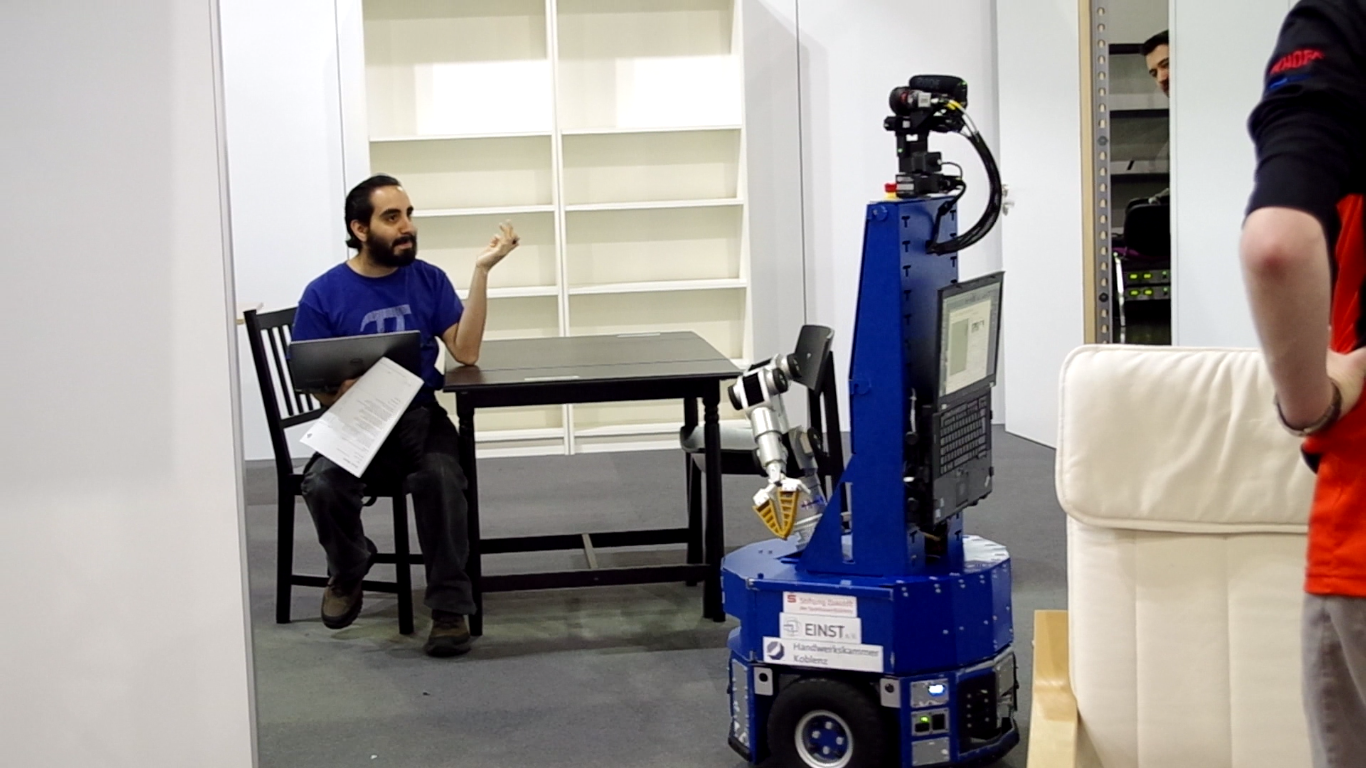 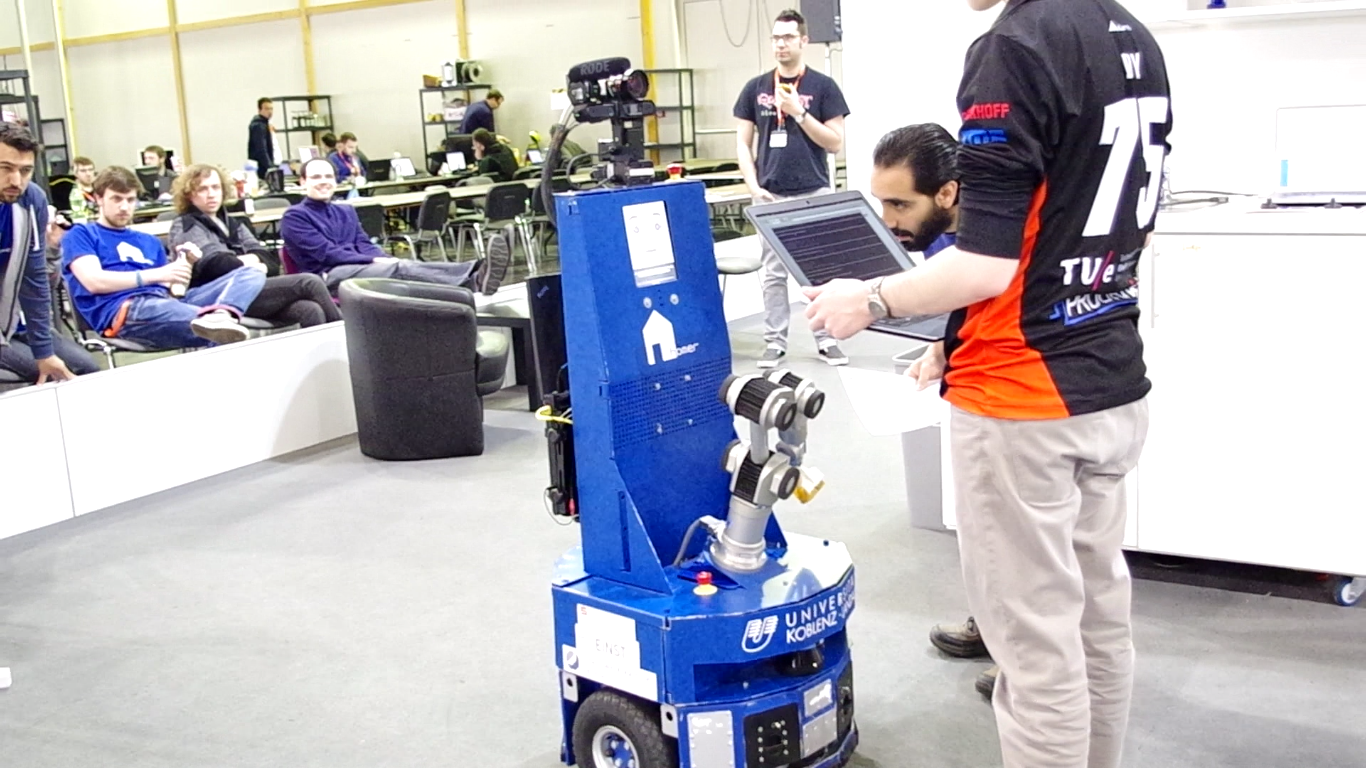 Today is the “official” start of the RoboCup. The tests for today were Speech Recognition, Person Recognition, Manipulation and Object Recognition, RoboZoo and Navigation.

The teams have three runs for this test, at the end the average of the two best runs counts.

Our first two runs weren’t that good, so the statemachine was changed shortly before the last run. Sadly it wasn’t a good idea, we had to cancel the test because the statemachine got stuck.

We did get 90 points for this challenge. Unfortunatly, Lisa had some problems with detecting the gender of the people in the crowd.

For this challenge, we prepared a snake-glove puppet and pulled it over the Katana arm. In addition, Lisa has a turban on her head. Afterwards Lisa becomes a snake charmer and lets the snake dance to arabian music.

This challenge is about detecting and gripping objects. Sadly, Lisa recognized just three objects so we could score only 30 points.

The robot must enter the arena, visit predefined waypoints and leave the arena. The path from a waypoint to another is always blocked by an obstacle that requires the robot to take an action to solve the task.

Lisa had some problems to recognize obstacles, for example she tried to drive through a door which was closed right before she was near it.

We could reach 90 points in this challenge.

The first test had to be shown today. This test is called RIPS ( Robot Inspection and Poster Session). There is no score for RIPS, you have to either prove the robot is safe enough for the competition or fail and not be permitted to continue with the next tests.

Unfortunately, for the first time, we couldn’t pass RIPS because Lisa touched a jury member when the emergency button was pressed and she had to stop driving.

Luckily we could show this test again and passed.

Yesterday we arrived in Magdeburg! After a short city tour we fell asleep to wake up at six in the morning to be at the hall as early as possible. The plan for today was to teach new objects to Lisa and to create the map of the arena. Also the first tests had to be performed and luckily we had no big problems up until now.

This time, we arrived with two robots. The second robot will perform, together with Lisa, in the final game. 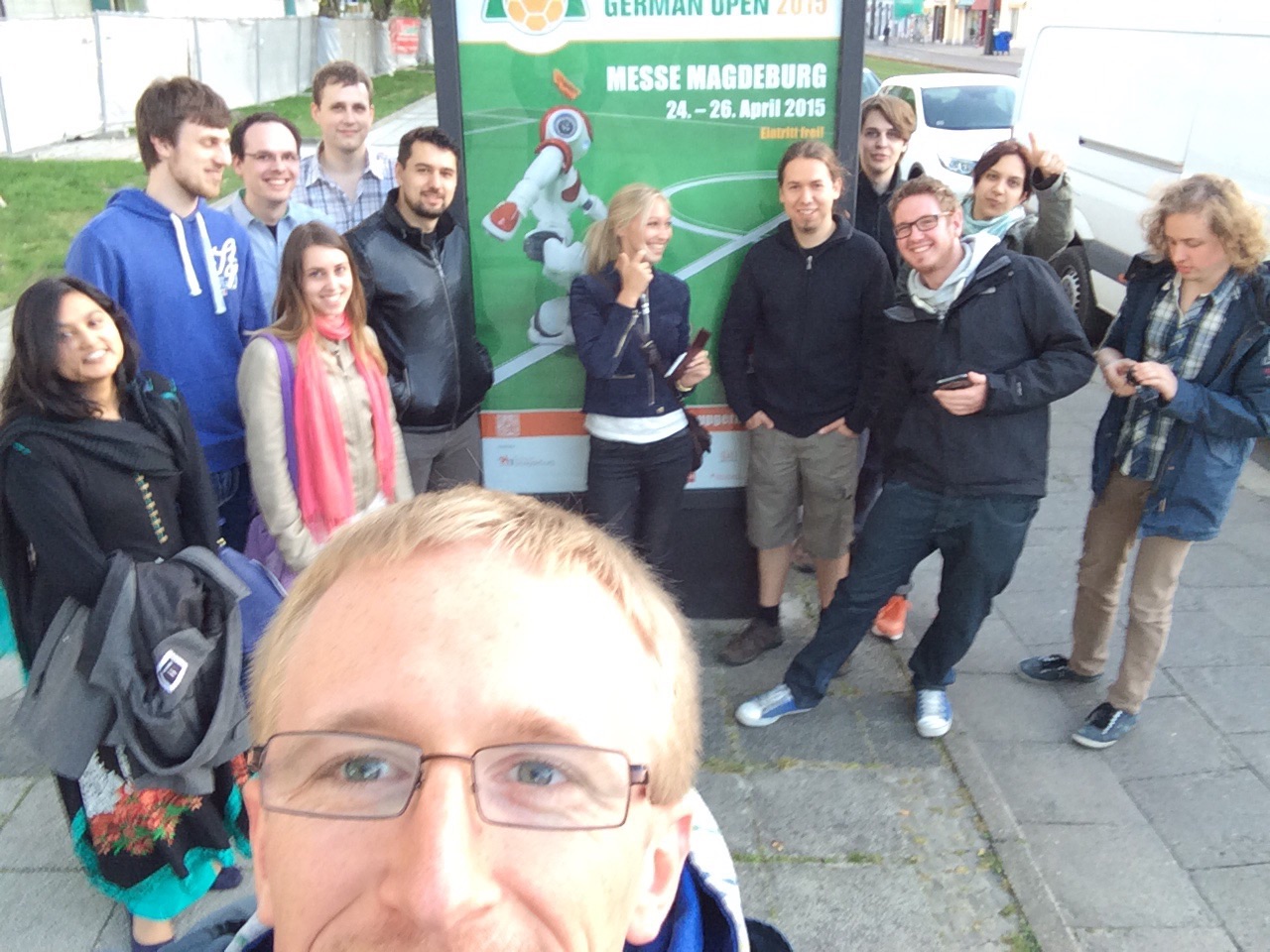 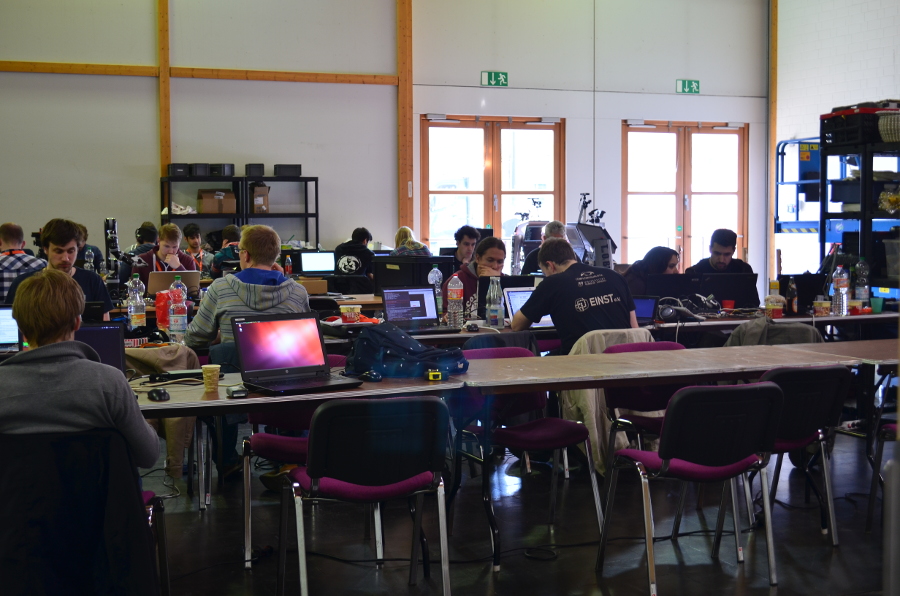 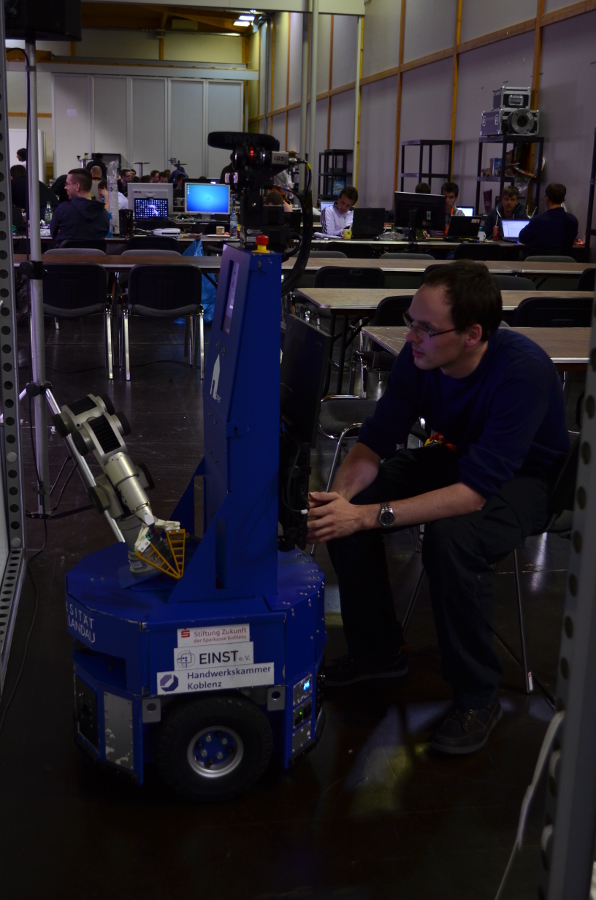 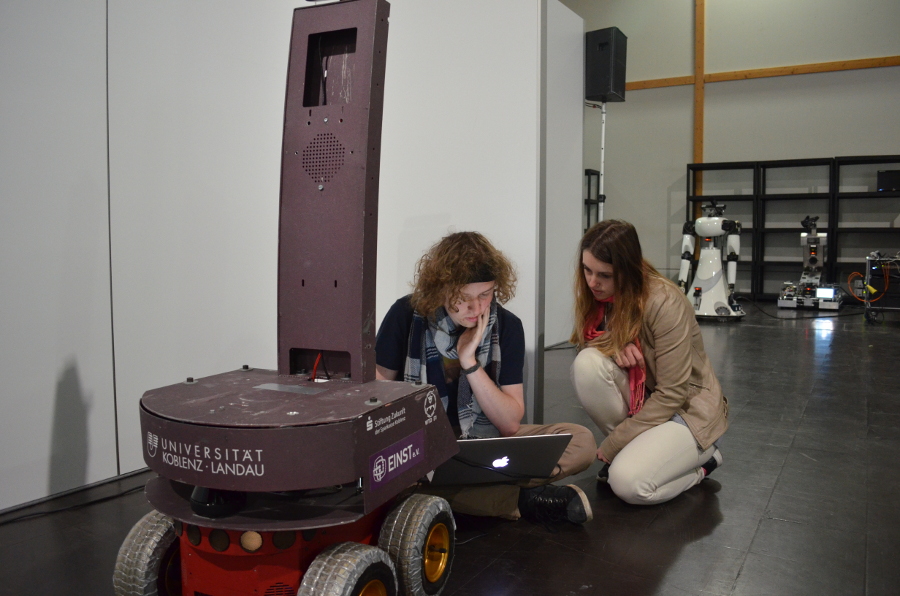 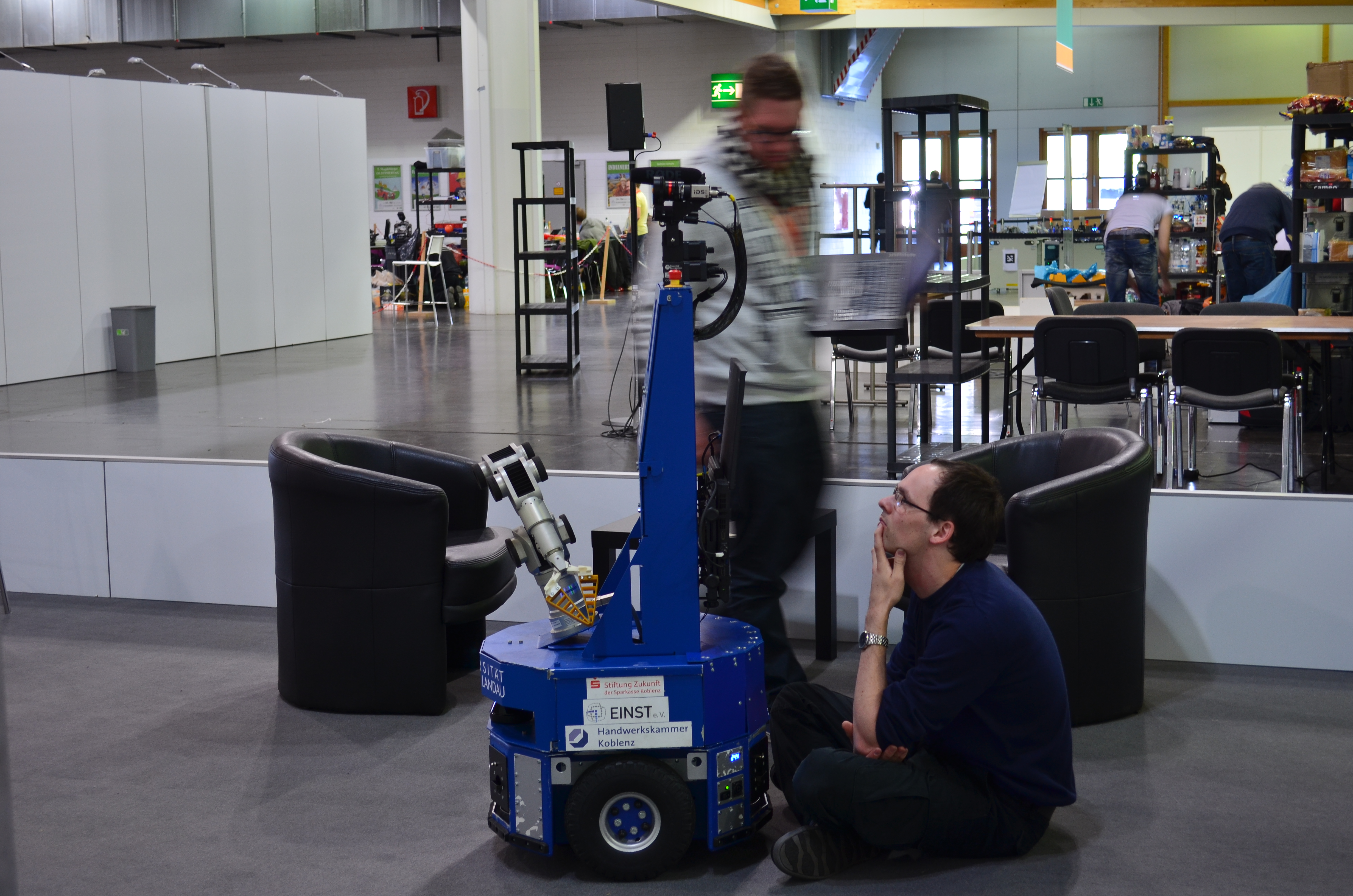