The last two days were meant for preparation. We mounted the fixed joint, labeled objects, mapped and tested a lot.

Yesterday there was the robot inspection. Both robots were very shy entering the arena on the first trial (and on the second trial … third trial :)). But finally when they were not surrounded by that many other robots they took their chance to get the robot inspection done such that the team could focus on testing the Stage 1 tasks. This year there was a major revision. There are two task categories. The first one is Party Host, which is as the name suggest focused on organizing a party. This means welcoming visitors, serving drinks and finding mates. After a successful party there is a lot of stuff to do. This is tested in tasks like taking out the garbage, cleaning up and serving as a general purpose robot (Housekeeper).

Today, during the official runs for stage 1, our robots continued being a bit to shy for the arena.. Because most of the teams reached a rather similar scoring, the jury descided that all the nine participating teams will be qualified for stage 2.

Tomorrow, it’s time for stage 2. Like in the previous stage, there are again two task categories. Being a good Party Host, the robots should be able to take orders from waving customer in a restaurant. In tasks like ‘Where is this’ the ability to remember and describe locations of objects is tested and ‘Procter & Gamble: Clean the table’ challenges the robots in their manipulation abilities. We’re very ambitious to achieve a good scoring tomorrow — the two best teams will reach the finals. Stay tuned and don’t forget to follow us on instagram!

We just packed our three robots. Starting from tomorrow we are in Magdeburg for the RoboCup GermanOpen. We compete against 8 other teams from all over the world. Among them are Mexico, India, France, Netherlands and of course some more German teams. This year there has been a major revision of the rulebook. In total there are now optionally up to 20 tasks in two scenarios that the robot could attend. Those tasks have to be chosen wisely as there is just a limited amount of time.

The past three weeks had be an up and down. Due to a hardware issue with TIAGo which PAL Robotics fixed quite fast we could not use TIAGo the last three weeks and hope that the fixed part will arrive by tomorrow.

This year the University of Koblenz and University of Bielefeld are chairing the @Home league together. The first two days are meant for preparation. The poster session and robot inspection are scheduled for the second preparation day.

Update: this morning we received the fixed joint.

Last week during the European Robotics Forum we were awarded with two prizes in two different leagues. First we won the “Best Team” Award in the Customer Service Robotics league. We have a long tradition in this league tracing back to the RoCKIn competitions. For the first time, we tried to compete in the European Robotics League for Professional Service Robots and succeeded. The Customer Service Robotics league focusses on benchmarking robots in domestic scenarios where the Professional Service Robotics league focusses on more industrial settings. This year the difficulty for Customer Robotics was slightly increased i.e. in the Getting to Know my Home task, the robots should autonomously create a semantic map of the environment and in the end should be able to replicate a known initial state. 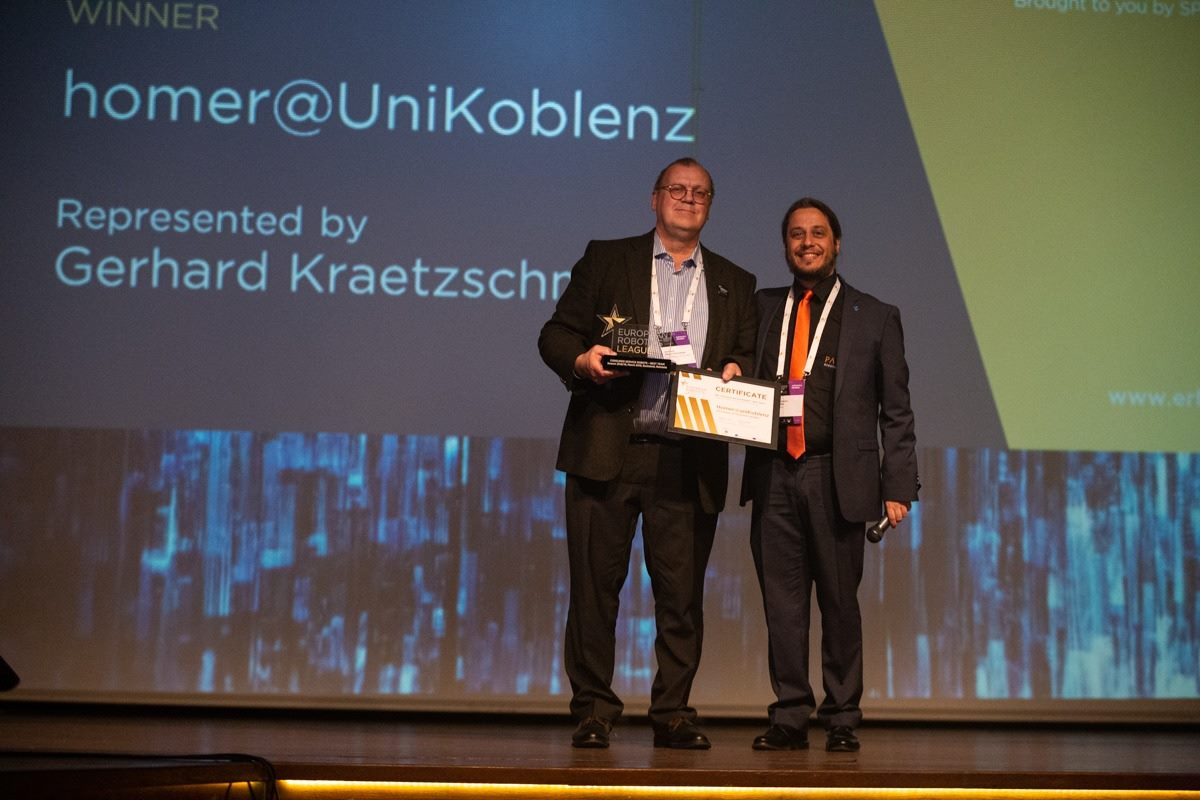 Gerhard Kraetzschmar of the University of Applied Sciences in Bonn represented us during the Award Giving Ceremony in Bucharest (Romania).

We are now concentrating in the RoboCup@Home preparation for the German Open in Magdeburg.

Together with the University of Applied Sciences Bonn-Rhein-Sieg we held a local tournament of the European Robotics League (ERL) in the Professional Service Robots category. 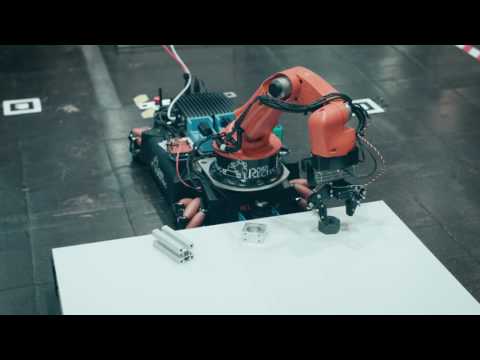 This league is an innovative concept for robot competitions which stems from its predecessor, the RoCKIn@Work competition, and focuses on tasks that industrial robots execute in a real factory environment. The ERL is composed of multiple “Local tournaments”, held in different research labs across Europe, with certified test beds, and a few competitions as part of “Major tournaments” such as German Open. Teams participate in a minimum of two tournaments (Local and/or Major) per year and get scores based on their performances. Scores of the best two participation in tournaments for each team are added and teams are ranked based on their cumulative score. Prizes for the top teams are awarded during the this year’s European Robotics Forum.

The robots were benchmarked in two categories which require active perception in a convenience store scenario. In the gripping benchmark the robots had to grasp items from a table. In the Serving Goodies scenario objects had to be grasped from a box and stored on a table. The box picking problem is an especially complex as the objects separation by the robot’s grippers.

In the end, we won slightly ahead of the team b-it bots@Work from Bonn. The intelligent controller of TIAGo — which verified successful grasping approaches — lead to an advantage over the b-it bots team.

Further tournaments of the European Robots League are now planned annually after this first successful event in Koblenz.